The names of the puppies in our A litter tell a story. Annette, Shadow’s first born girl, was named after her own breeder. Arnold, Shadow’s 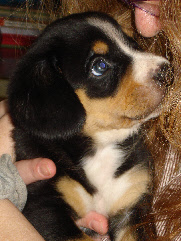 first born boy was named after a wonderful Swiss vet who came to her rescue when her microchip failed after her mating, preventing her from returning to the UK. Adrienne and Avril are named after dear friends. Alan is named after my father. Amigo… well there is nothing an Entlebucher wants more than to be your amigo, your best friend, your loyal companion. Aristotle… I’ve tried to give one in every litter an intelligent name. Never has a puppy lived up to his name as this little chap has. 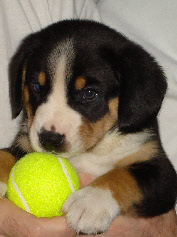